Although, I have not posted anything quiltish much since October last year, I have done a few quilt activities and been otherwise busy in addition to working too much as usual. No time to post about quilting for sure with current job responsibilities, teaching on the side, taking a few classes, trips to see daughter and travel lifetime trip to Alaska with my mom. (I should be doing something else now, but will get up early to catch up on other computer assignments). Here are some highlights beginning last fall, where I left off... 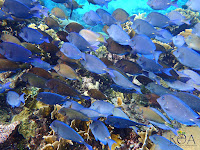 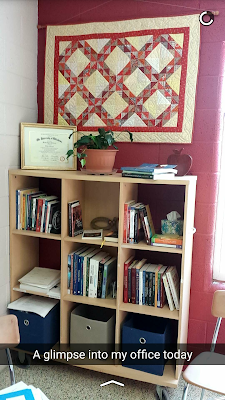 In October with hubby and college friends who planned this trip to celebrate their 30th anniversary. We made is our 30-year anniversary celebration too (about 6 months early for us) and had a blast driving to and cruising from Galveston in torrential rain, flooding, and strong winds that delayed our sailing out of port until the following day. Still the trip was SO Awesome! Since I am finding my photos of people right now, here are some fish seen while snorkeling in Roatan Honduras. What a wonderful trip! Ready to go there again!

In November I updated my office with a quilt! I made this in early late 1980s or early 1990s if I recall (I'll have to check the label on the back :) I love the colors and ocean waves always! It is named Flaming Ocean as a blend of my former and current life at the time I made it. Ocean Waves pattern for California where I grew up and red "flaming" for the Citizen Potawatomi Nation in Oklahoma whose native tribal emblem is fire, Pottawatomie also the county I'm in..., not to mention RED dirt in these parts! It is made of old scraps and pieces from dresses of my mom and me as a child, and scraps gathered from local garage sale clothing - looking for just the right warm reds and tans. A large shell design is quilted in the centers of light yellow blocks. Machine pieced and hand quilted. Full of many wonderful memories of quilting with friends in my early years of quilting. Still one of my favorites and the perfect art for this wall!

December was time for family in California. No quilting that I recall, although I take my handwork with me, not much gets done. Instead we play family games by the hour (Cared game Capitalism was the biggie this year). I also indulged in the annual cousins cookie decorating event!


January: I worked on Cheddar Cheese & Crackers - a mini-quilt from Lori at Humble Quilts. She offered a sew along a few years ago and I did not participate but kept this in mind to make sometime - modified a bit of course to go along with the fabric I had and enlarge a bit. I sewed off and on many evenings in between many house guests. I just love the old-time style and appeal! Plus she used a creative sewing approach to avoid setting in any seams. 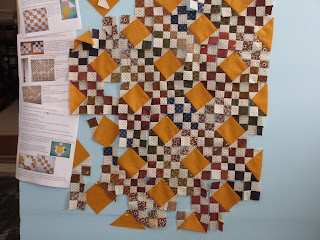 Other big news for January is that ds moved out (after having returned from college a couple years ago). He is enjoying his job and moved closer to it. We are happy for him, but helping him move a HUGE sofa to his second floor apartment was NOT fun. Where are all the young strong college aged guys when you need them? Somehow, we out-of-shape 50+ year olds (+ son) managed without getting hurt. 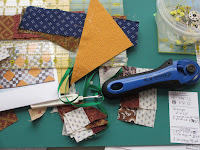 February: A quick weekend trip to watch dd run, and jump, throw, and hurdle, in pentathlon and open hurdles. She is amazing! First time I have seen her compete in track in college (3 yrs). Had a great time using my voucher from previous trip last year when I gave up my seat for $700 worth of travel - YEAH! 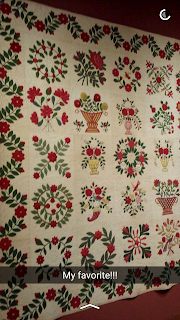 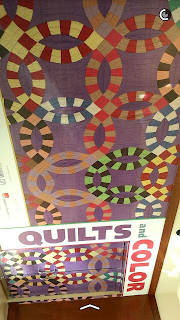 I also attended the Quilts and Color exhibit at Oklahoma Museum of Art. A spectacular, up-close look at these lovelies visiting from the east coast. There was even one applique quilt! 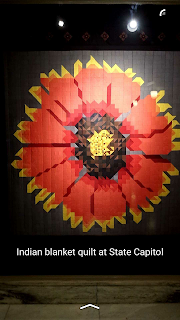 I also spent a professional day at the State Capitol in March and stopped by to see many arts in the building including this lovely Indian Blanket quilt. 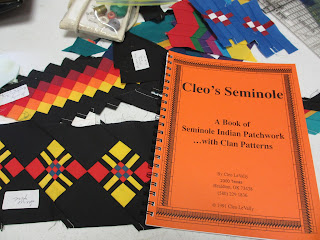 Attended Seminole Piecing Workshop of Shawnee Spinning Spools Guide (few hours as observer) with local Seminole piecing legend, Cleo LaValley - maybe her last class as she is 91 years young. Bought her book just in case I decide to try it out sometime.
My cousin had a bridal shower - I did not get to go out west to attend, but saw the lovely pictures AND surprise, this quilt was part of the decor! I made this quilt for Kelsey when she was a little girl. Hope I signed and dated it but likely not, back then. But she and her mom recall who it was made for and who made it :) 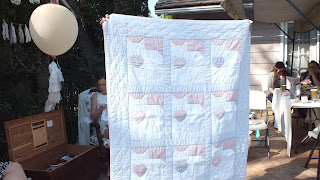 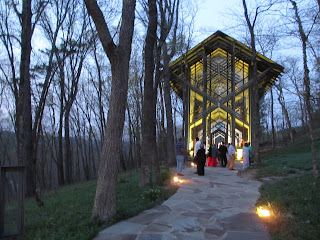 April: Road trip to attend a beautiful wedding in the Ozarks at this lovely chapel for daughter of great family friends since college. We are honorary "aunt & uncle" to each others' (now grown) children. Congrats Tara & Matt!

May took me from coast to coast. Said goodbyes to dad who passed away a few days later in San Diego. Two weeks later I was in New York, (via Pennsylvania and Cleveland) to "fetch" daughter from college (really to help her pack up apartment and drive back to Oklahoma). She will be here all summer - a real treat for us since she has been away at school or internships since the week after she graduated high school.
We also worked on a quilt together! Her request :) What a thrill! One of her mentors from City of Hope recently had a baby and so she found a pattern online she modified it to her liking, we sorted through scraps, and I cut and pinned while she sewed and pressed. We worked about a week solid every night after work until 12am or so to get the top finished. Last time we quilted it was making her quilt as a child about 10-11 years old.

June was also a lifetime Alaskan adventure, dream come true for my mom, me and my daughter! Thousands of photos later (don't worry, I only posted three), it is still unbelievable! We all even did a zip line through the forest while there and I managed to find a few quilt shops to browse and learned about qiviut! (exotic arctic yarn made from muskox). This was planned as mom's trip with me, but she graciously allowed granddaughter to come too at the last minute (2 weeks in advance) once granddaughter's ability to travel overseas to Kenya for internship tanked due to injury (torn ACL). Three generations and a lifetime of memories, most good :) 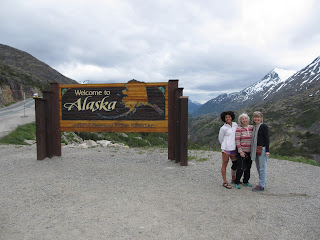 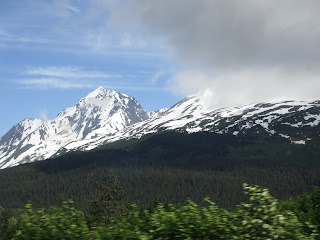 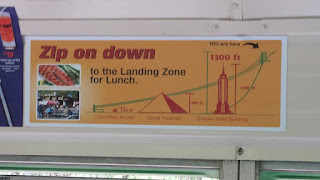 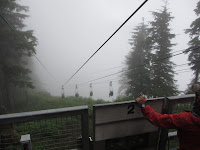 July started out in San Diego with family on the 4th. Enjoyed excellent food and a celebration of life after my dad's passing in May. 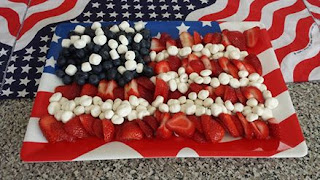 I has been HOT now! Plus the yard has needed a good amount of attention for plants to survive! dd had knee surgery (only reason she stayed in OK this summer) and is re-cooping well but required some extra TLC (being waited on like a princess!) and still has her limitations. She's here for about 6 weeks until returning to east coast in NYC this semester). While here, she has decided it is her duty to help us empty cupboards, closets, garage shelves and everything to get rid of stuff. Great idea, just very hot and messy and not what I want to spend my after work and weekend hours on at this point. Still doing it.

Thinking about a baby quilt now that needs starting for Tara & Matt's boy due in October. Bought the pattern while in Alaska. It will be fun! I am looking forward to what is ahead...I often have quilting on my mind at the end of the day with a quilt magazine or pattern book by my bed to flip through the pages as I fall asleep with the beautiful images in mind.

I have enjoyed many quilt projects and patterns from Gaye and had fun reading her blog at Sentimental Stitches http://sentimentalstitches.net/ Most recently I have even been collecting the 1857 Album quilt block free patterns she offers each month, although I have not made any of them. I also have Beyond the Cherry Tree patterns and have some progress making them (love those old red and green quilts!. Now she has blessed me with yet another treat by selecting me as the winner of her 20th Anniversary prize of EQ7. I can't believe it! Thanks Gaye! Next, need to take some time and post a blog update. 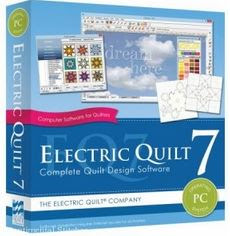 Blogs that Inspire Me (See many more below)

Please respect my creative work. Ask to use images from this blog with permission from me. Thank you so much.

MORE ... Blogs that Inspire Me

Finished /Out the Door!